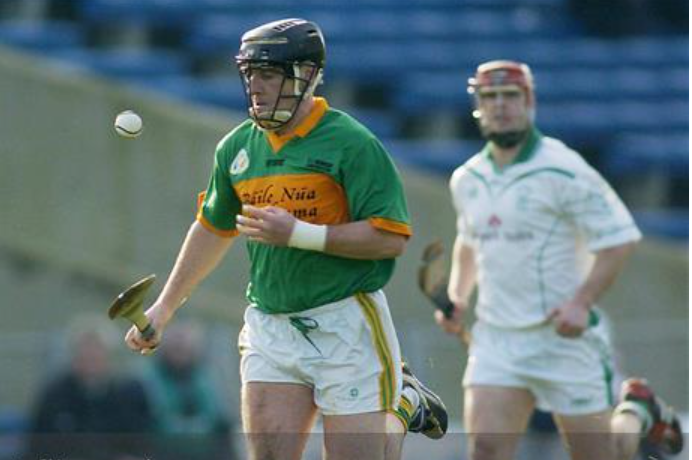 The game that got us to Croke Park.

In February 2004, Newtownshandrum beat O'Loughlin Gaels of Kilkenny in the replayed All Ireland Club Semi Final in Thurles on a scoreline of 0-14 to 1-08.

Watch the action on the link below.

From the Irish Examiner

Newtown set sail against the wind
IT was tougher, tighter and didn't have the pretty hurling of the drawn game, but at Semple Stadium on Saturday, Newtownshandrum finally ended the dogged challenge of O'Loughlin Gaels of Kilkenny in the All-Ireland club hurling championship semi-final.

Last week it was the Mulcahy/O'Connor-twins' show as Pat, Jerry and Ben put on a virtuoso display for Newtown, O'Loughlin's clawing their way back into the game principally through the second half point-scoring of free-taker Nigel Skehan; this time it was a far more balanced display from the Cork champions.

Their three stars again shone brighter than any, but what had been a distinctly dodgy full-back line of team captain John McCarthy, Brendan Mulcahy and Gerdy O'Mahony gave a more confident display, conceding just a scrappy goal and four hard-earned points to what was a very dangerous Gaels inside trio.

Wing-back Ian Kelleher was superb, defending tenaciously while also launching many an attack, Phillip Noonan too came much closer to his true potential on the other defensive wing. Midfielder Alan T O'Brien's pace and control split the Gaels defence time and again while up front, John Paul King was regal on the wing, notched three superb points from play, offering badly-needed firepower to Ben O'Connor, with Donal Mulcahy also working hard.

This time, too, the Newtownshandrum substitutions worked out, young Dermot Naughton particularly effective in the middle of the field: He came in at the right time, when the game was close and tough, he's a big strapping lad, and he did a good job, said manager Patsy Morrissey.

Bearing in mind the criticism they had shipped after the failed switches of the drawn game, coach Ger Cunningham was a little more sardonic. Shows we can get it right as well, doesn't it, he grinned.

Problems up front for Newtownshandrum, however, as the Brians Kelly, Hogan, and Murphy, put the cuffs on Newtown's inside line of Bowles, O'Riordan and Farrell, the only line where the Kilkenny kingpins held the upper hand all game.

In fact, with one crucial difference, it was almost exactly as-you-were for the Gaels from last week. Wing-back Seán Dowling was again outstanding, Maurice Nolan a serious scoring threat, as was Brian Dowling, but their two big men, Andy and Martin Comerford, were again outgunned by Newtown's Ben O'Connor and Pat Mulcahy (why, oh why, did the Gaels not shift the brothers?). That single crucial difference? Free opportunities for the lethal Nigel Skehan, two this week as opposed to nine last week. That was no accident either.

Don't concede frees, that was a major part of our plan, said John McCarthy. Force them to beat us from play, and they struggled to do that.

Indeed they did, but Newtown too struggled to impose themselves on the scoreboard when they were clearly the better side, especially in the first half, when they were backed by a strong if swirling wing.

We didn't make use of the breeze at all, carved them open at times but couldn't finish it off, said Jerry O'Connor. We knew we were up against it in the second half, against that strong breeze, only a point up (0-8 to 1-4, six points from Ben, two from John Paul), but we said it in the dressing-room at half-time, our backs are to the wall, only one way to go, and that's forward. Also playing on the minds of the Newtown team during that half-time break was their collapse in the last 20 minutes of the drawn game. As captain McCarthy revealed, they were determined not to let that happen again. We were expecting a ferocious challenge from them in the second half and we geared ourselves for that, but it just never materialised. O'Loughlin Gaels never came out for the second half, it just didn't happen for them, whatever the explanation is. It's a fantastic feeling, but no good unless we finish the job.

Exactly the feeling of Pat Mulcahy, the undoubted on-field leader of this team. He got huge assistance on this occasion from a fired-up defence that was prepared to risk bone and blood to deny O'Loughlin's a free shot on goal, but time and again it was the tall and graceful figure of Mulcahy gliding free of the heaviest traffic with ball in hand, setting up the clearance, that raised many an O'Loughlin's siege.

It was scrappy the pitch was cut during the week and there was a big difference from last week, made the first touch a bit more difficult, for both teams. There was also a swirling wind which explains a lot of the wides. Croke Park on St Patrick's Day is going to be some occasion for the club, we're going to have to knuckle down for the next few weeks, hopefully get the right result.

On this form, it will take an enormous effort from Antrim champions Dunloy to deny them. Word to the wise, to those who think that game is a foregone conclusion: this Dunloy team beat Athenry, drew with Birr, when both of those brilliant club sides were at their peak. Worthy of mention on its own from this day, the final point of the day, the score that broke O'Loughlin hearts. From nearly 85 yards, into that swirling wind, Jerry O'Connor hit a deliberate ball well left, watched it come back and drop over the black-spot. Killed the game stone dead.

We are ready!We are delighted to have our new Back Nets i...

In 1992, Newtownshandrum and Dromina drew in the North Co...

On the way to the 2009 County Final, Newtownshandrum over...

Thanks from the Minor Panel and Mentors

The Minor Panel and Mentors would like to thank everyon...